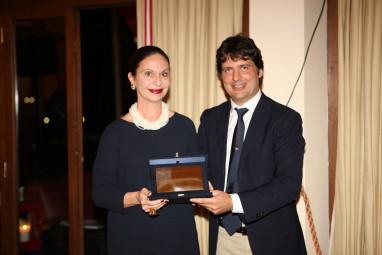 After her resounding success at the Monaco Yacht Show, Stella Maris weighed anchor and headed down coast to take part in the opening weekend of the Genoa Boat Show where she – 72 metres long and 2,300 GT- was crowned undisputed flag ship of the manifestation.
Here – and precisely at the Italian Yacht Club – in a
sparkling soirée of Italian excellence, our shipyard was honoured with a very prestigious award. In fact, one of the Owner/Directors of VSY, Cristiana Longarini, was awarded the Yacht Capital Marina Yachting Award 2012 in recognition of her new model of management based on her ethical approach to integrated sustainability. In thanking the sponsors of the evening, Cristiana Longarini underlined the importance of this award as a recognition of the policy the company had embarked on. However, she pointed out that she accepted the prize on behalf of the entire shipyard – to emphasize the fundamental importance of teamwork. In indicating the pathway of sustainability as an alternative for the future, her closing remarks were very much on this theme: “For us, sustainability means discovering new routes and – as history teaches – courage and passion alone redesign the maps necessary for new ways forward.”