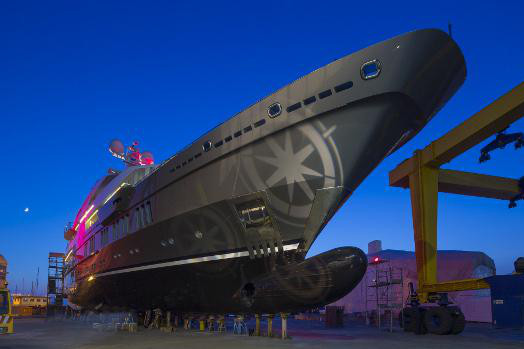 On Saturday 23rd June last, VSY-Viareggio Superyachts presented in Viareggio their 72-metre flagship Stella Maris.
After the resounding success of the two previous 62-metre yachts Candyscape II and RoMa – which in recent years have been directly instrumental in projecting VSY into the international Olympus of super-yacht builders – it was the turn of Stella Maris.
Managing Director of VSY, Luciano Scaramuccia stated that the impressiveness of this 72-metre – conceived in line with the yard’s values and reflecting the fusion of avant-garde technology and the excellence of genuine Italian craftsmanship in full respect of the environment – crowns her as the most important yacht of this size built in Viareggio over the last 30 years. This event of considerable importance for the whole community as well as the yard itself, was celebrated with the workers, local authorities and bodies, all of whom have collaborated with VSY over many intense months. At present Stella Maris stands in all her imposing presence on the large square in front of the shipyard, illuminated in a play of multi-coloured lights at night for all to admire – landlubbers and seamen alike – thanks to the expertise of the prestigious firm Targetti of Florence. There she will remain for some weeks to complete the final preparations for her transfer on a floating pontoon to the Arsenal in La Spezia where she will finally touch water at the official launch. After this, she will take to the open sea with her fortunate owner until September when she is certainly destined to make a big splash in Monaco during the Boat Show.