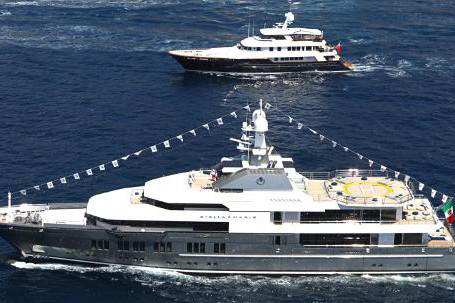 Stella Maris flagship vessel of the Superyacht Rendezvous in Monaco

It was a great debut for Stella Maris at the annual Superyacht Rendezvous in Monaco. Held in the international capital of yachting, in the spectacular setting of the French Riviera, the event again attracted superyacht owners from around the world.
Stella Maris, with its 72 metres and over 2,000 gross tonnes, was the flagship vessel of this year and played a leading role in all the events scheduled over four days in Monaco, from the Rendez Vous Yacht Hop inaugural Diamonds & White Party on Saturday, where she appeared from the sea under the star filled sky of an enchanting evening. Stella Maris shone not only for the extraordinary heights of her saloons, the expansive use of glass, the innovative shape of her bow, the heliport certificate and her huge staggered bride decks, but also for the numerous eco-tech solutions implemented throughout, which won the prestigious Environmental Protection Award at the Showboats Design Awards 2013, held in Monaco during the Rendez Vous.